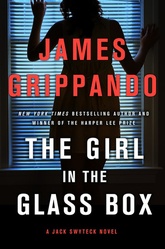 The Girl in the Glass Box

Julia Rodriguez and her teenage daughter Beatriz escaped bloodthirsty gangs and Julia’s abusive husband in El Salvador. In Miami, life is hard, but safer, until Julia rejects her boss’s sexual advances. Thanks to an “anonymous” tip to US immigration authorities, she is locked in detention with criminals and slated for deportation. Jack Swyteck’s only legal move to save her is asylum—a long shot in today’s charged political climate.

Julia and Beatriz thought they’d left danger behind them. But now, even Miami isn’t safe. A ruthless enemy may have tracked them to south Florida and is biding time, patiently waiting to strike. In a case where the stakes have never been higher, Jack may not be able to save his client—even if he wins.

“Grippando has become a master at taking ‘ripped from the headlines’ events and turning them into involving thrillers.”—Miami Herald