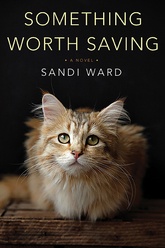 A boy and his cat

Charlie insisted on rescuing Lily from the cat shelter despite her injured leg. Now, Lily wants to rescue Charlie.

She’s the only one who’s seen Charlie’s bruises. If she knew who was hurting him, she’d scratch their eyes out. Lily needs to get the family to focus on Charlie—not easy when they’re wrapped up in their own problems. Charlie’s mother kicked his father out and her new boyfriend seems charming, but he’s still a stranger. Older son Kevin misses his father desperately. Victoria, Charlie’s sister, has someone new in her life, and Lily is suspicious. Even Charlie’s father, who Lily loves dearly, is behaving strangely.

Lily knows you don’t have to be the biggest or the strongest to fight fiercely for the ones you love.

“[Ward] is an exceptionally perceptive author who brilliantly puts into words what life, love, and living are really all about.”—Fresh Fiction