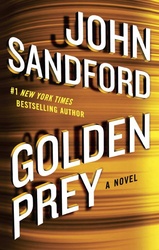 U.S. Marshal Lucas Davenport is thrown in the deep end

Lucas Davenport's new job takes him into the biggest arena of all. He is a U.S. marshal-one with unusual scope. He can investigate anyone he wants, across the country, and once in a while may be called upon for "special cases."

His first case is a doozy. A rash of audacious robberies reminds Davenport of a criminal he chased years ago, the leader of a gang focused on large cash crimes, and who didn't mind leaving bodies behind. The last time he was heard from, a shootout left two FBI men dead. Davenport thinks he may be back.

Davenport is a maverick with an exceptional ability to get inside a killer's mind. He knows this is the kind of investigation he was hired to pursue, and he knows something else: This could get ugly fast.

"Sandford has always been at the top of any list of great mystery writers.... His writing and the appeal of his lead character are as fresh as ever."-Huffington Post

"If you haven't read Sandford yet, you have been missing one of the great summer-read novelists of all time."-Stephen King

"There is no limit to John Sandford's ability to keep new breath and blood flowing into his Lucas Davenport novels."-Bookreporter.com