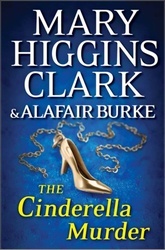 The producers expect killer ratings for this show

Producer Laurie Moran is happy when the pilot for "Under Suspicion" is a success. The programï¿½which re-creates unsolved crimes with those affectedï¿½is off to a fantastic start when the first episode helps solve an infamous murder.

Laurie knows which case will be next: the Cinderella Murder. When UCLA student Susan Dempsey was killed, her murder raised numerous questions, including: why was one shoe missing when her body was found? The case is sure to attract great ratings, especially when the suspects include Hollywood's elite and tech billionaires. Laurie hopes Cinderella's murderer is ready for a close-up.

"Fans of [Mystery Writers of America] Grand Master Clark will find plenty of intrigue and excitement in this contemporary thriller...."ï¿½Publishers Weekly