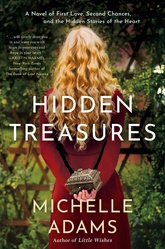 Release Date: December 7, 2021Presales available for members only. To purchase this title, please log in or join now.

A journey of discovery

In a small village in southern France, a pretty, willful English girl is falling in love. Frances Langley has fallen under Benoit’s romantic spell, so sure is she that he is everything she’s ever wanted. But Frances is hiding a secret. And to hold on to his love, she is willing to do anything for him, even put herself at risk by hiding a precious object, stolen by the Nazis decades before.

Years later, Frances’s son, Harry, opens the door of his late mother’s home, never expecting to see Tabitha—the lost love of his life—on the other side. Their angry parting had broken his heart, but now she holds a letter, sent by his mother just before her death, begging the pair to search together for a priceless jewelry box.