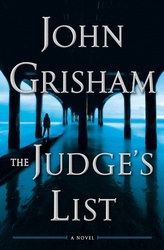 Lacy Stoltz is tired of her work for the Florida Board on Judicial Conduct and ready for a change. Then she meets a mysterious woman who is so frightened she uses a number of aliases. Jeri Crosby’s father was murdered 20 years earlier in a case that remains unsolved and that has grown stone cold. But Jeri has a suspect. Along the way, she has discovered other victims.

The man is brilliant, patient, and always one step ahead of law enforcement. He is the most cunning of all serial killers.

He is a judge, in Florida—under Lacy’s jurisdiction.

He has a list, with the names of his victims and targets, all unsuspecting people unlucky enough to have crossed his path. How can Lacy pursue him, without becoming the next name on his list?