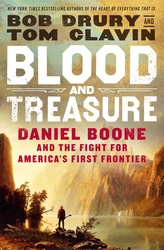 Blood And Treasure: Daniel Boone And The Fight For America's First Frontier

Release Date: April 20, 2021Presales available for members only. To purchase this title, please log in or join now.

The man, the myth, and the conquest

It is the mid-18th Century, and in the 13 colonies founded by Great Britain, anxious colonists desperate to settle North America beyond the Appalachian Mountains engage in a never-ending series of bloody battles against Native American tribes, the French, and finally against the mother country itself.

This is the setting of Blood and Treasure and the guide to this epic narrative is none other than America’s first and arguably greatest pathfinder Daniel Boone—not the coonskin cap-wearing caricature of popular culture but the flesh-and-blood frontiersman and Revolutionary War hero.

Now, thanks to painstaking research, the story of the brutal birth of the United States is told through the eyes of both the men and women who witnessed it.